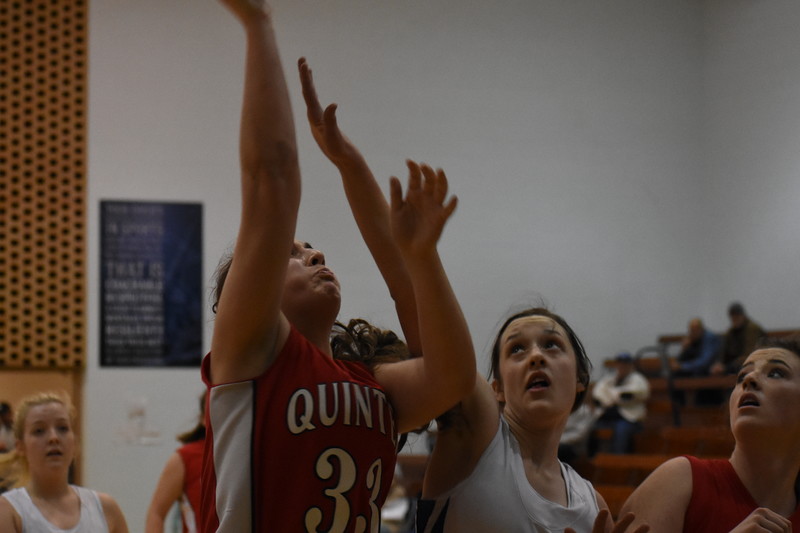 The Quinter girls’ varsity basketball team defeated the Wheatland/Grinnell Thunderhawks on Tuesday, February 5, but the junior varsity lost to the Hawks.

In this close matched game against the team down the road, the varsity led in the first quarter by two points, 10-8. Quinter outscored the Hawks again in the second quarter by five points making the score at halftime 27-20. After half, Quinter struggled with offense and defense, allowing the Thunderhawks nine points to their own two. Quinter went 10-18 at the free throw line, giving them the win over the Thunderhawks 41-34. Andrea Charles and Blake Selensky each had 11 points, and Selensky added 10 rebounds. Selensky and Evie Gruenbacher also led in steals with four, adding to a team total of 11.

The JV only played two quarters against the Thunderhawks. Wheatland/Grinnell outscored Quinter in both quarters and led the Bulldogs going into the final quarter 12-4. Quinter stepped up their offense and scored 13 points. Seven points came from made free throws and two three-pointers from Millie Brown and Kayler Getz. Quinter lost by a final score of 17-29. Getz led in scoring with six points followed by Angel Moore with four.

“Both teams played tough and never gave up no matter what the score said,” commented Moore.

The Quinter Bulldogs will be back in action on Thursday, February 14 to compete against the Golden Plains Bulldogs for a make up game at home. The girls will tip off at 6:00 p.m.