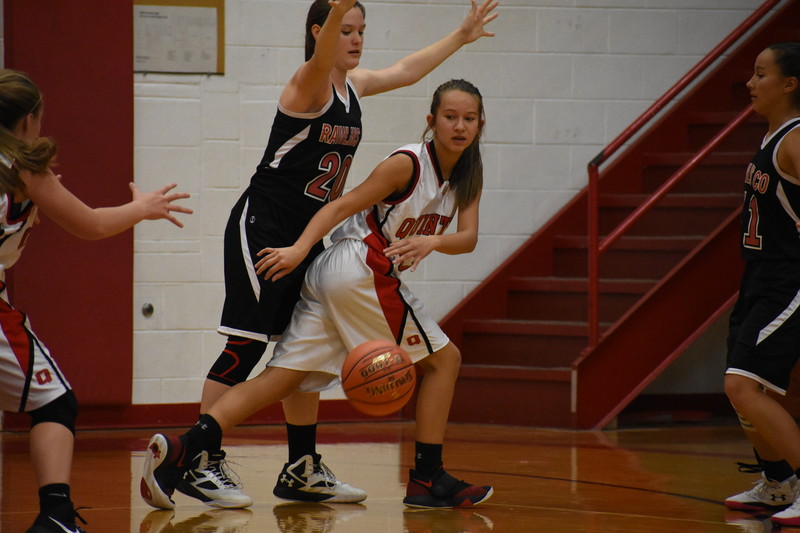 On Thursday, November 1, the Quinter Junior High girls took on the Rawlins County Buffaloes at home. This was their first game and they went 0-3 for the night, not picking up any wins.

During the first quarter of the A-team game the Bulldogs scored a total of four points, letting the Buffalos score 11. In the second quarter, Quinter scored four point and Rawlins County added three as the Bulldogs slowly closed the lead. The Bulldogs still trailed at half 8-14. In the third quarter, Quinter came out and scored five points, letting Rawlins score seven. The Bulldogs came out in the fourth quarter behind and scored six points while holding Rawlins to two, but could not overcome the early deficit, losing 19-23. Cashlyn Kvasnicka led the team in scoring with eight points.

“Everyone played super hard and there has definitely been an improvement from the beginning of the season when practice just started,” mentioned Leah Anstaett.

In the B-team game the Bulldogs scored four points and let the Buffaloes score four to tie the game at the end of the first quarter. In the second quarter, Quinter got down as they scored two and the Buffalos scored six, making the score 10-6 at half. In the third quarter, the Bulldogs let the Buffaloes score nine points while only scoring one.  Quinter scored zero points in the fourth quarter and Rawlins County added six to end the game 25-7. Mackenzie Reinert was the top scorer of the game with five points.

The Bulldogs are back in action at home on Thursday, Nov. 8 at 4:30 p.m. They will take on the Dighton Hornets.