Both Quinter Teams Go 1-2 in Quad at Home 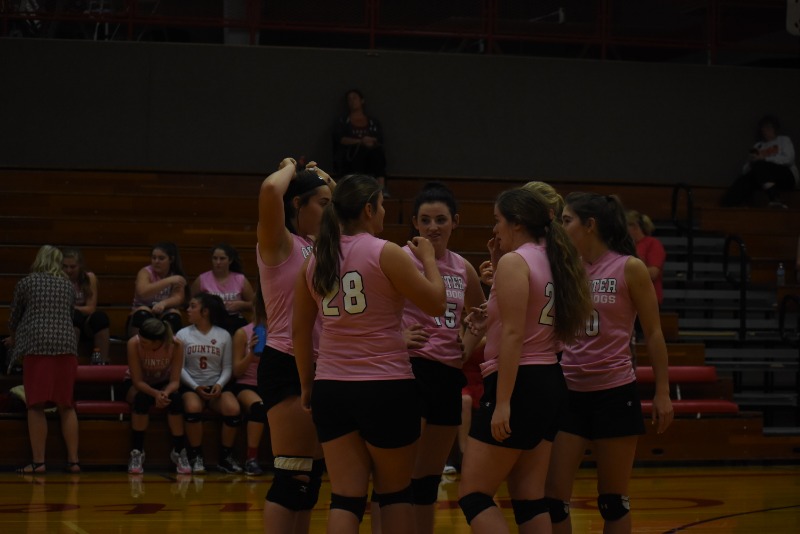 On Tuesday, October 2, the Quinter Lady Bulldog volleyball team hosted a quad consisting of the Dighton Hornets, Wallace Co. Wildcats, and the Greeley Co. Jackrabbits. Both the junior varsity (JV) and varsity finished the night 1-2.

“I think we started out really strong in the first set, but as the night went on we lost some of our communication. Overall, we are improving a lot,” commented Brittney Lewis.

On the varsity side, Quinter took on the Greeley County Jackrabbits to open the night of play. Greeley County grabbed the lead early in the first set, but Quinter fought back and gained a one point lead. Quinter continued to score off the Jackrabbits until they brought the score within one point. Both teams fought for the lead with small serving runs, but Quinter ended the game 25-23. Quinter started the second set with the serve, and both teams struggled to score off each other. Evie Gruenbacher stepped to the line leading an eight point serving run, including one ace. After the loss of the rally and a side out, Andrea Charles scored six more points for the Bulldogs, giving them a hefty lead over Greeley Co. Quinter won the set with a final score of 25-10.

Next, Quinter faced the Wallace Co. Wildcats. In the beginning of the first set, both teams were unable to put together a large run until the Wildcats took a 12-8 lead over the Bulldogs. After another small run, Quinter couldn't catch back up and lost the set 14-25. Quinter came out revengeful in the second set. Wallace Co. took the lead early in the set, but the Bulldog fought hard and stole the lead back. After multiple small serving runs, Quinter defeated the Wildcats 25-17. In the final set, Quinter started the game with a 4-0 serving run. Soon, the Wildcats established a two point lead over the Bulldogs that would stick until Gruenbacher served a six point run, taking the lead 18-15. The Wildcats responded with their own run, stealing the lead once again. Wallace County jumped ahead 22-19.  Quinter rallied and tied the set at 24-24. The two teams continued to trade points and the lead until Wallace County pulled out the 28-26 victory.

Quinter’s final opponent for the night was the Dighton Hornets. Throughout the match, the score remained close. Quinter took a 11-7 lead after Blake Selensky served five points off the Hornets. Next, Kayler Getz scored six points including two aces to open up a 18-11 lead. Following a Dighton timeout, Quinter was unable to maintain their lead and lost the first set 22-25. In the second set, Quinter had a hard time running points off of Dighton. While Dighton had multiple serving runs, Quinter could only score two points each run. Quinter lost the second set 19-25.

Quinter will take on the Northwest Kansas League Tournament in Hoxie on Saturday, October 13. The games will begin at 9:00 a.m.