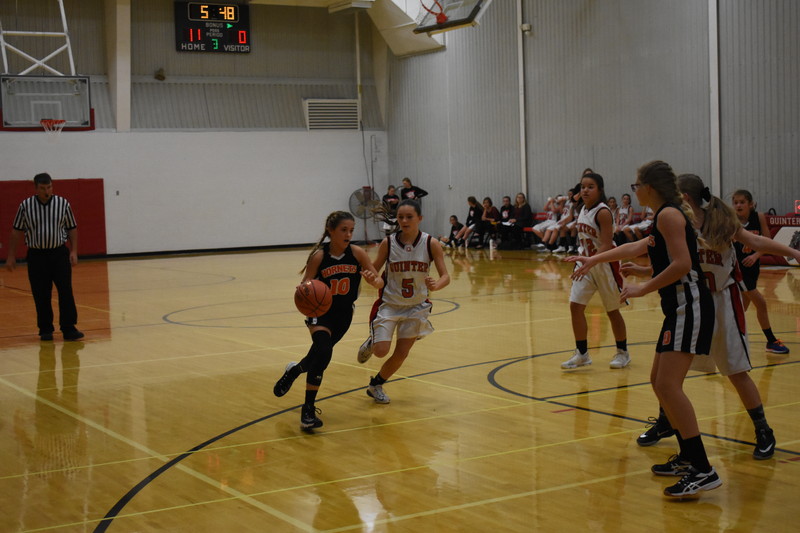 Quinter faced off against the Dighton Hornets on November 8.  The A-team lost while both the B-team and C-team picked up victories.

For the A-team, the score was tied by the end of the first quarter 6-6. Anna Briggs led the team in the second quarter with six out of the nine points scored. Going into halftime, the Hornets led the Bulldogs 18-15. After half, Dighton stepped up their defense and only allowed Quinter to score eight points in the second half. Dighton ran 15 points off of the Bulldogs in the third quarter and seven more in the fourth. Dighton defeated the A-team by a final score 40-23.

The B-team defeated Dighton 30-5. Mackenzie Reinert scored seven points in the first quarter. Neither team score in second quarter, but Quinter maintained their lead throughout the game by scoring 19 points in the second half while Dighton only scored five.  Reinert led the team in points with nine followed closely by Kaitlyn Countryman with eight.

In the two quarters of the C-team game, Josie Stewart scored six points for Quinter. Quinter worked hard on defense and only allowed the Hornets to score one point.

Quinter will take on the Wallace County Wildcats at Sharon Springs on Thursday, November 15. Games will begin at 4:00 p.m.